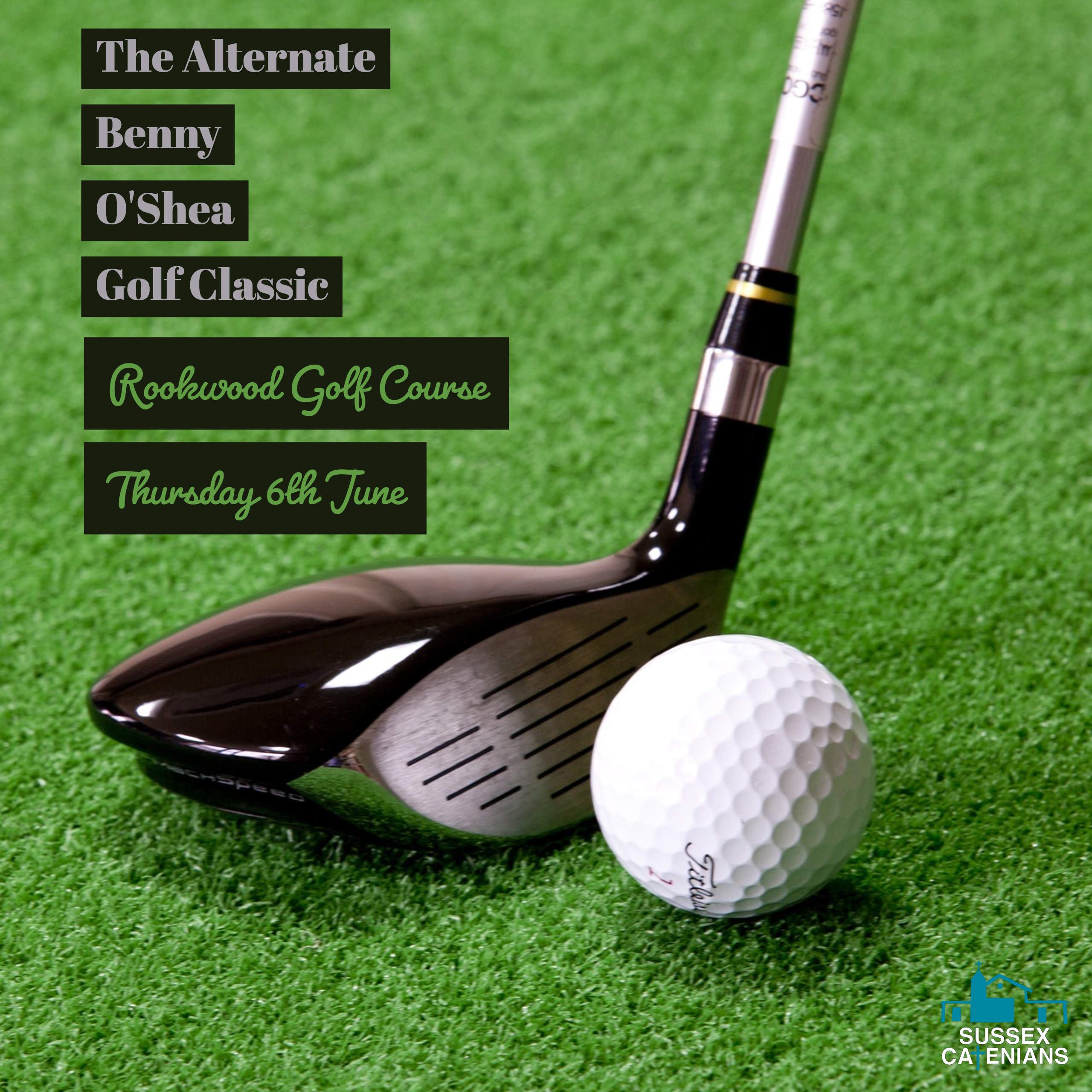 Find out more about 'The Alternate Benny O'Shea' or.... book a match or make a donation,

please use the form below.... 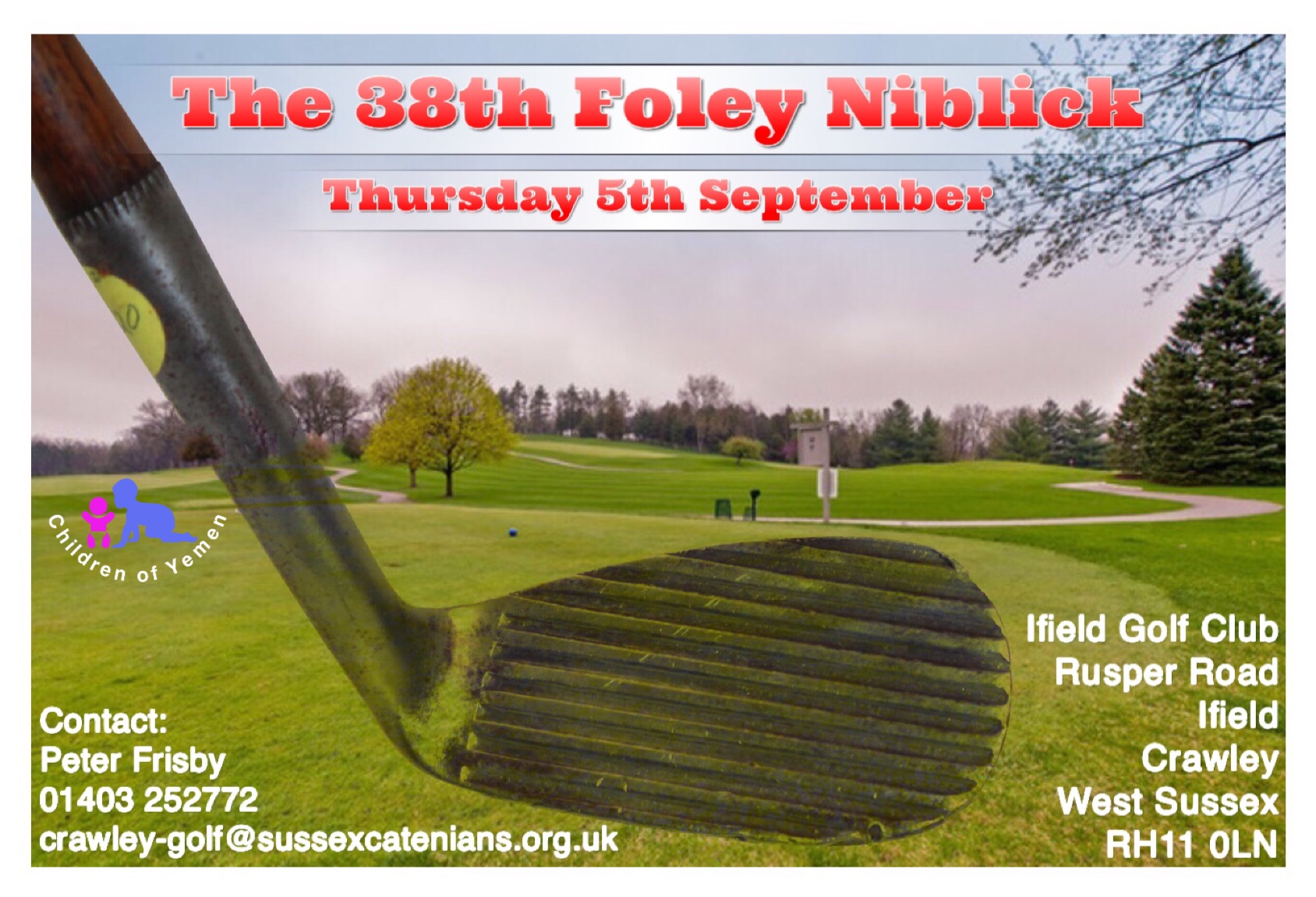 Another Golf Classic being celebrated again this year. The dedicated team of Bros. Peter Frisby & Manus McDermott (Crawley Circle) put this together each year and by so doing, raise significant sums for the supported Charity. Please do support them  ... whether or not you are a golfer. There is always a splendid lunch on offer at a bargain price and it comes with real bonhomie.

If you can’t make either the match or the lunch, please do give a small donation to a very good cause. To email Brother Peter Frisby, click here or on the image below...

Email Peter Frisby to find out more about 'The Foley Niblick' or book a match or make a donation, please use the form below....

IN PREVIOUS YEARS, DIDN'T WE DO WELL...?

FOLEY NIBLICK 2018 - A note from Bro. Peter Frisby of Crawley Circle on behalf of the organisers, players and contributors to 2018's very successful charity golf match.... 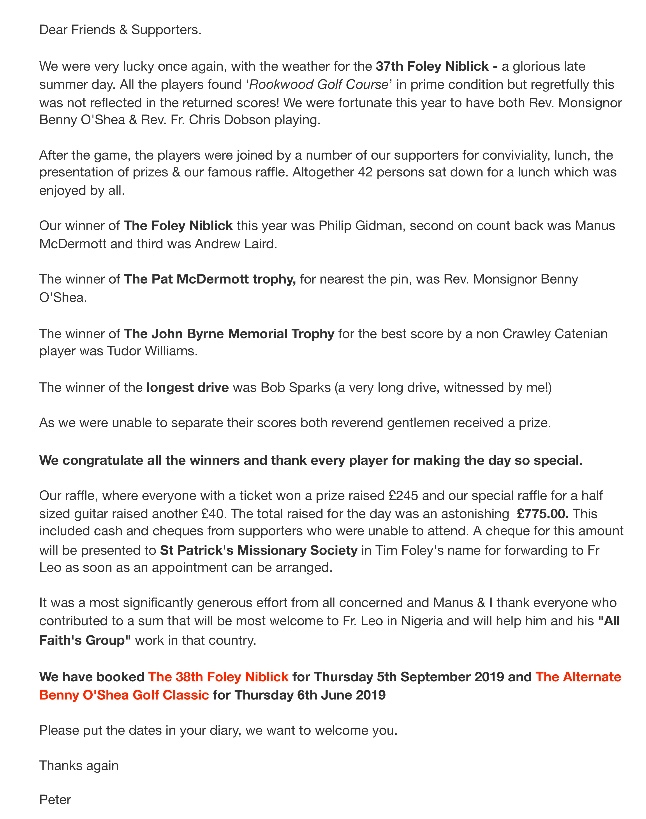 At Ifield Golf & Country Club Crawley on Thursday 7th June, the Brothers of Crawley Catenian Circle were joined by Catenians from the Province and beyond together with other interested friends from far and wide. We were raising funds for The Timios Trust, an ecumenical Christian Charity offering bursaries to young people going abroad to work for needy causes. You can find more about the trust by visiting their website: www.timiostrust.com.

The day was rather overcast with a chilly wind but otherwise great golfing weather. The course was as usual for our events in almost perfect condition. The scoring was not particularly high but all participants expressed their enjoyment and after all that is the purpose, that we spend an enjoyable day raising money for a deserving charity. Other supporters joined us after the golf for the conviviality, lunch, prize giving and our famous raffle where everyone gets a prize!

The prestigious Alternate Benny O’Shea golf Classic trophy was won this time by Peter Evans one of our most regular supporters. Mark Gidman was second & Bob Sparks third. John Myall won the nearest the pin competition & Adam Burt had the longest drive. The two ladies played so well and as they achieved the same score both were awarded a prize.

Our famous raffle this year raised £340. which is amazing. Donations from those present for the golf and lunch and from those unable to attend who never the less sent a donation or raffle prize enabled us to achieve the grand sum of £1350.  A cheque for the cash raised will be presented to David & Helen Skipp the founders of the Timios Trust on Sunday 1st July.

Manus & I would like to thank all those involved for their help and considerable generosity in raising this significant figure for a most worthy charity.

We look forward to seeing you again for this year’s

which will be held at Rookwood Golf Club in Horsham on

Please note this date in your diary, we want you there". 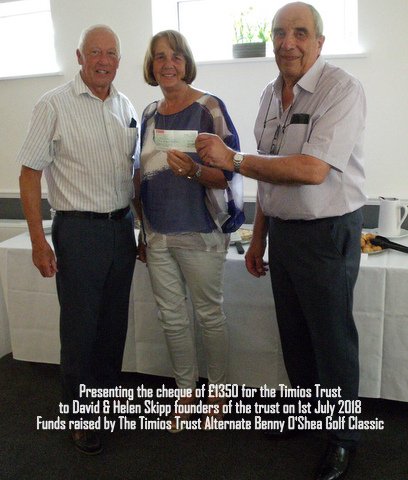 ‘THE TIMIOS TRUST - ALTERNATE BENNY O’SHEA GOLF CLASSIC
Bro. Peter Frisby (right) provides this photo of the presentation of a cheque for £1350 to David & Helen Skipp founders of 'The Timios Trust’…. http://www.timiostrust.com
The money was raised at the 'Timios Trust Alternate Benny O'Shea Golf Classic' played at Ifield Golf & Country Club on 7th June 2018. This magnificent sum was welcomed by the Trust and marks the considerable generosity of the players and sponsors of this year’s ‘Alternate Benny O’Shea Golf Classic’. It will be put to good use.

Bro. Peter, on behalf of himself and Bro. Manus McDermott (both of Crawley Circle), thanked everyone for their kindness in supporting this very good cause.
REMINDER: This year's FOLEY NIBLICK, also organised annually by Bros. Peter & Manus, has been booked for Thursday 6th September at Rookwood Golf Course Horsham. Please put it in your diary.

To find out more about 'TIMIOS TRUST' and the vital work they do,

A letter received from 'Sightsavers'... 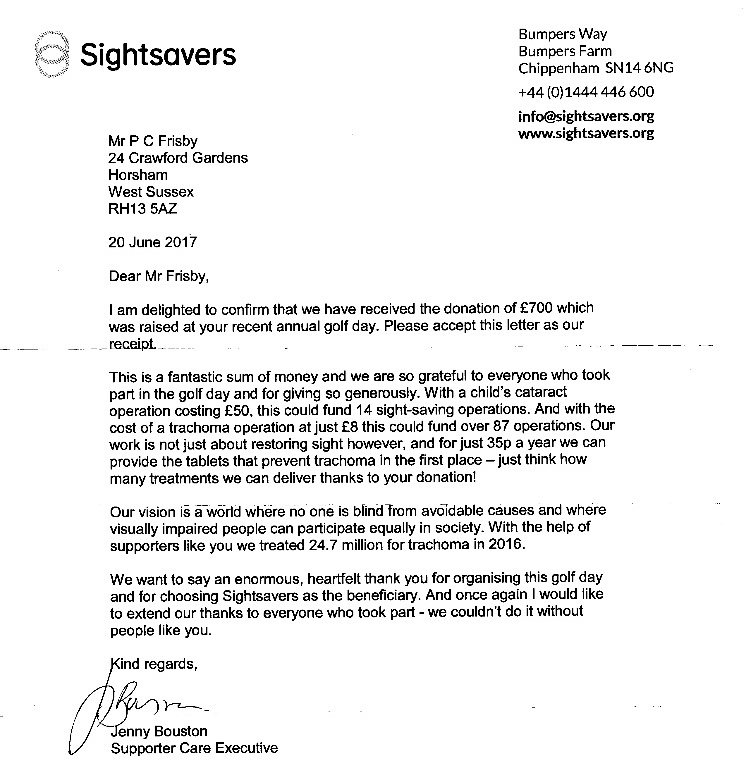 To find out more about 'Sightsavers' and the vital work they do,

A message from Brother Peter Frisby of Crawley Circle.....

Please see below a photograph of the presentation of the funds raised at last year's 'Foley Niblick 2017'. The cheque for £750 was received by Fr. Patrick on behalf of The All Faiths Initiative and will ensure that the full amount gets to them. Fr. Patrick asked that we thank everyone of you for your significant generosity both now and in the past. This money will enable Fr. Leo presently in Ghana to continue his work in Nigeria. Although he is in Ghana, for his own safety, he supervises the All Faiths Ministry in Nigeria and occasionally slips over the border to Nigeria. He has to be careful as he personally is a target for Boko Horam. He says this is proof that the initiative is working.

Manus & I thank you for your continued support of our efforts to raise funds for this great ecumenical movement. We have booked tee times for next year at the golf courses for both 'The Alternate Benny O'Shea Golf Classic' and 'The Foley Niblick'. We hope you are able to join us for both. Please note the dates in your diary:

We look forward to welcoming you again. 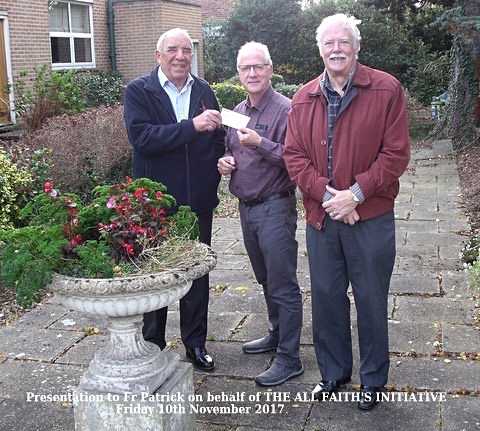 MORE ABOUT 'THE FOLEY NIBLICK'

For many years now the Crawley Catenian Circle has had an association with the game of golf. Mostly this consisted of casual games between members of the circle and occasional games with members of other circles in Province 18. The introduction of “The George Batty Cup” in the 1980’s changed this when a formal match was instigated against the Brothers of Reigate circle in memory of Founding Past President George Batty of Crawley, with the intention of encouraging visiting and friendship between the two circles. Although there have been a few misses due to both Circles not always being able to raise enough players at the time, this has continued to this day.

Another Golf competition was started for members of Crawley Circle. The introduction of this competition stemmed from a weekend fourball game played by four members of the Circle. Tim Foley, one of the four, had played for a couple of years, learning the game, using clubs he inherited from his father. On this particular weekend Tim announced that he was going to buy new clubs and retire his old set. It was suggested to Tim that it would be a good idea to offer one of his clubs as a trophy which the four would play for on an annual basis. Tim agreed and said that the Niblick would be best as it was the club that had given him the most pleasure to use and his companions the most amusement!

However wiser counsel suggested that it would be even better to set up a Crawley Circle competition for the Niblick to be played for on an annual basis. Tim agreed; he also wanted to offer it in memory of his father Francis from whom he had inherited it and had been a Catenian as a member of Newport Circle.

'The Foley Niblick' was introduced in 1981 and this year we will be playing the 30th Foley Niblick. Tim organised this as a casual trophy game with very little formality, before, during or after the game. There would be a simple presentation and only modest prizes apart from the Niblick and no speeches. These rules have continued to be the essence of the competition. Since the untimely demise of Tim in 2003 the Niblick has been played as a memorial to Tim and his father and the additional element of raising funds for one of Tim’s favourite charities was introduced. The St Patrick’s Missionary Society was designated as the recipient of the monies raised but this too changed in 2008.

Fr. Chris and his congregation

Fr. Chris McGuinness, a member of the St Patrick’s Missionary Society and known to several of the Crawley brothers was posted to the Island of Grenada in the West Indies. His shock at the condition of his parish, his church, home and the home for abused boys that he supervised prompted him to write asking for financial help as he was desperate and any amount, however small would be appreciated.

The problems in the parish originated from the hurricane, which swept the island in 2006 causing a great deal of damage. Relief was received from the British and other governments and relief agencies, this was soon used but as other catastrophes hit the media headlines the relief reduced to a trickle and the Islanders were left largely to their own devices. Fr Chris turned to his friends. Last year another trophy was introduced to the “Niblick” this was the “Pat McDermott Memorial Trophy”, in memory of Pat who was a great supporter of all Catenian golf over many years. Although we do welcome other players only a member of Crawley Catenian Circle can win either trophy. Visitors can however win a small prize.

The third golfing event in the Crawley Circle calendar stemmed from frustration! For a number of years 6 members of the Circle used to play in an event organised by a member of Brighton 17 Circle as a way of raising funds for one of the Brighton & Arundel diocese Priests who had been seconded to a poor parish in Peru. This was named after the Priest involved and named “The Benny O’Shea Golf Classic”. It proved to be very popular and by the year 2000 there were as many as 250 players and a great deal of money was raised. The very popularity however caused its own problem for the Crawley contingent because a round of 18 holes of golf was taking 6 hours to complete! Taking the view that “The Benny” was popular enough to replace the six players, they decided to play their own golf game and send any monies raised to The St Patrick’s Missionary Society, similar to “The Niblick”. Having played this game once it was thought that another golf competition for Crawley Circle would give the season better balance and so it was named, a little tongue in cheek and introduced to the circle as “The Alternate Benny O’Shea Golf Classic” It was decided that it would not be restricted to members of Crawley Circle, any Catenian or friend, male or female would be welcome. From 2006 the cash raised from this event was also allocated to Fr Chris.Catenian golf is always played in a spirit of friendship; it is not winning a trophy or prize that matters, although we always try to win if we can, it is the companionship and the memory of those no longer with us that are paramount.

If you are interested in playing in any or all of these events and are not already on the list for invitations please contact either Peter Frisby or Manus McDermott.